I wanted to follow up with some tasting notes on this recipe and blog post. Here’s a photo of a pint – note that the head had fallen in the time it took to pour from my keezer, bring the glass up from the basement, set it down, and snap a photo. 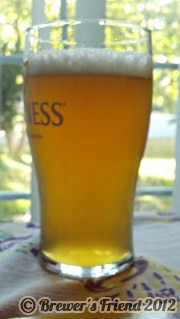 Appearance – Pours a deep, orangy golden color with a fluffy two finger head and respectable retention. Head retention, however is not like a Hefe. Hazy as a wheat beer should be.

Aroma – First impression is a distinct fruity, floral aroma – not from hops, but from the chamomile. Deeply fragrant, with a nod to a malty wheat background. If you hate chamomile you’d get turned off, fast! No detectible hop presence. Overwhelmingly chamomile. I used a clean American yeast (Pacman), so I don’t detect any yeast character in the nose. Not much honey in the nose, but I wonder if some of the powerful aroma is the honey in the background that isn’t distinctly detectable.

Taste – Rich flavor. A blast of chamomile!  You can taste the wheat beer character behind the chamomile and honey. There is some honey character as you get past the initial blast of chamomile. Pacman is a high attenuator, and my FG was lower than the recipe specified – more of the honey was fermented out. Despite the pleasant dry finish, this is a flavor powerhouse. Serious character – this beer has a definite point of view. If you like chamomile, it is an easy drinking, highly flavorful beer.

Mouthfeel – I carbed to 2.5 volumes and that was sufficient. Mouthfeel is medium – not light and airy, but not heavy, either.

Drinkability & Notes – This beer was warmly received by craft and non-craft beer drinkers alike. Most of the keg was consumed at a big party. People were stopping me and saying how great the beer was. The non-craft beer drinkers guzzled this. I didn’t specify what herbs, etc were used in the beer. Most people who tasted it were completely uneducated on what beer it was and so forth, and it was widely accepted. That said, I was disappointed there was not more honey flavor. I think that was primarily due to using Pacman, which is an aggressive attenuator. When brewing this again, I plan to use a yeast with lower attenuation to see if I can nurse out more honey character in flavor and aroma. I will brew this again, although this recipe will not unseat Belgian Wit as the number one wheat beer in the house. Overall I’m satisfied – I wanted a different wheat beer for a while, and this did fit the bill and turned out to be a good party beer.