We were running dangerously low on Witbier, our standard summer quaffer. Hoping for an interesting alternative to try, I was “shopping” for inspiration in the wheat beer recipes on Home Brew Talk (or Homebrew Talk, HBT, depending how you spell it). I ran across one posted by Passed Pawn – a Honey Chamomile Wheat. He adapted the “Wildflower Wheat” recipe from Sam Calagione’s book Extreme Brewing. Sam is the founder of Dogfish Head (DFH) Brewery in Delaware. He is known as a creative brewer. I haven’t read the book, but after smelling the wort on brewday I’ll be purchasing it soon!

First, here’s the recipe from the book, per Passed Pawn. The book lists an extract recipe:

I’m much more of a hophead than most of our friends, so I used caution on the IBU’s. I didn’t have Vanguard on hand, but a recommended alternative is Hersbrucker, which I did have. I stuck close to the original IBU number (around 15) and honey addition proportion.

The only major deviation would be the yeast. My only on-hand wheat beer yeasts were too flavorful – Wit and Hefe yeasts. My English yeast (1968/002, the Fuller’s strain) was busy working on my Special Bitter. I had some Pacman rinsed from a recent APA batch and decided to use it for the yeast.

Here’s a link to my recipe, right here on Brewer’s Friend!
https://www.brewersfriend.com/homebrew/recipe/view/10990/wildflower-wheat-honey-chamomile-wheat

Let me confess that I am a sucker for chamomile in brewing. It adds a lovely nose to Witbiers. The prominence of this herb was the major attraction to this recipe. And the quantity is EXTREME – 2 ounces! When I use chamomile in Wits, it’s at flameout and typically 2 grams. Take a look at this pic – a mountain of chamomile: 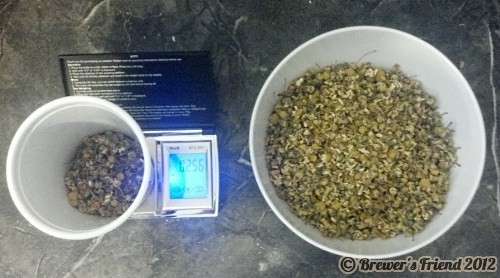 I’m in a transition phase of moving to milling grain at home. This brewday was the first test drive of the mill. The pic below shows the handle, but I didn’t use that…my ½ inch corded drill made short work of the white wheat malt (my 2 row was already milled). 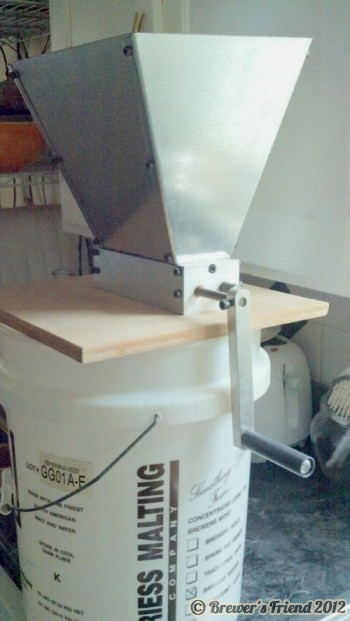 I do a modified BIAB with a sparge and mash in a 10 gallon Igloo tun. I used to mash on the stovetop in a stockpot. I’d wrap the pot in blankets during the mash to keep the temp up. I was losing too much heat in the winter, so when I saw this mash tun for sale on Craigslist, I didn’t hesitate. The tun’s first life was as a jobsite handwashing station. Luckily it only ever had water in it. Man is it ugly on the outside! The man I bought it from added a nice stainless steel braid insert and the valve as well. Works great!

I put my bag into the tun to make cleanup easier. While it is something else that needs to be cleaned and preheating takes extra time, I love the temperature stability and find the tradeoff in time and cleanup worth it. Here’s a pic of the bag on the mash tun: 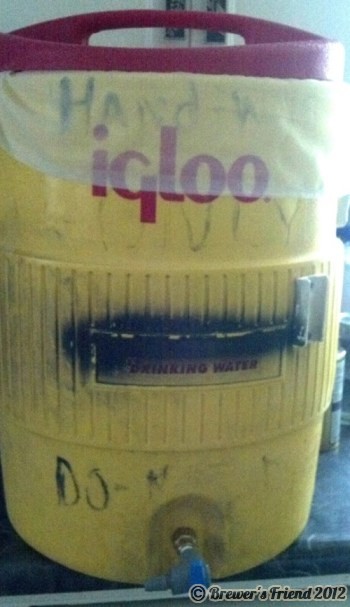 The mash was uneventful. With the help of Brewer’s Friend ‘brew’ feature I hit my temperatures and collected the wort quantity I needed. I’ve been experimenting with one or two water additions for my batch sparge. This time I did two additions…I got 76% efficiency. Fortunately the mash calculations in Brewer’s Friend make this pretty painless to coordinate and measure. On to the boil – man is that a lot of chamomile! 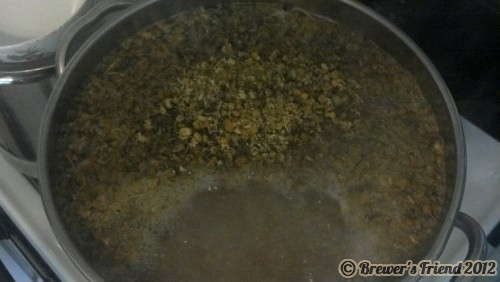 I was wondering why the chamomile addition at the beginning of the boil and not the end like many Wit recipes call for. I’m guessing Sam of Dogfish Head may explain it in the book. As I smelled the chamomile throughout the downstairs during the boil I reasoned that the 60 minute addition is like making a whole bunch of tea and leaving the tea leaves or herbs in the water for a long time. It’s an alternate way to get that flowery, fruity fragrance in the beer. I’m looking forward to the end product to see if I should apply this addition timing to Witbiers. I wouldn’t use the huge quantity, but the process of adding at the beginning of the boil might be useful for other beers.

As you can probably see, I boil on our stovetop. We have one of those high power burners and it is a gas range. It works adequately. I don’t want to move my brewing out of the kitchen. It is much easier for me to get stuff done during the “in between” times on a brew day when I’m inside in the kitchen.

I love the way wheat beers smell when they’re boiling. This was no exception – it smelled wonderful! The honey is added at flameout – it too smelled great…Passed Pawn said much of the honey character remains in the finished product. I sure hope so! 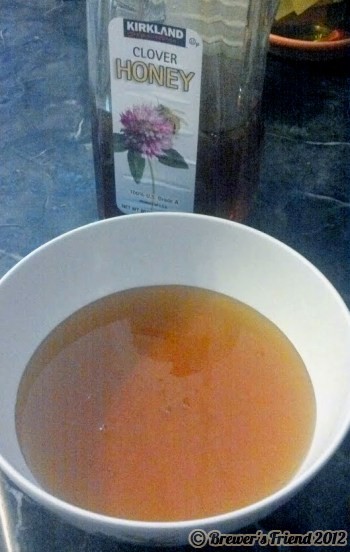 So, now I just need to wait and see how this ferments out. I can hardly wait!