For a refreshing twist on home brew, try something called a shandy – beer mixed with lemonade, ginger ale, etc.

It has been a blistering summer where we live. I was over at a friend’s house recently. She pulled out a Leinenkugel Summer Shandy out of the fridge and poured me one. It was pretty good – not great – but good. Later that weekend, our next door neighbor handed me a homemade shandy with Boulevard Wheat and lemonade.  Much better! Still a bit sweet, but much better.

I had a keg of wheat beer in the keezer and I had promised to bring some homebrew to a party. Inspired by these weekend quaffs, I set out to craft some homebrew shandy using a wheat beer as a base. (In this case, it was a hefe-like wheat beer.) Here’s a link to the recipe, but I used 2 row instead of pilsner…that’s why I say it was hefe-like…

Often shandys are made with wheat beer. Radlers are made with lager. Not a hard and fast rule, but typically the case. Different countries have different traditions of mixing other liquids/juice with beer. Here’s a link to an interesting article about these traditions and other beer cocktails.

Ok, back to the story…

I’d recommend you start with some lemonade you like. We have a Trader Joe’s around the corner, so we drink a fair amount of their lemonade you get in the frozen section. The price is right and it’s tart and tasty. Don’t skimp too much here…it will be a significant contribution to the flavor.

There are two basic “dials” you’ll be adjusting to get your shandy where you want it:

1. The flavor of the lemonade (how concentrated you mix it)

2. The proportion of beer to lemonade

I’m not going to spend a lot of time on the first “dial.”  This is largely a matter of taste – we typically make ours a bit more concentrated than the instructions on the Trader Joe’s frozen lemonade can. If you try my steps below and you’re still not thrilled, remember that you can modify the lemon flavor with a more/less concentrated lemonade.

I recommend that you work in small quantities to get your desired flavor profile identified. Here’s what I used to dial in my shandy: 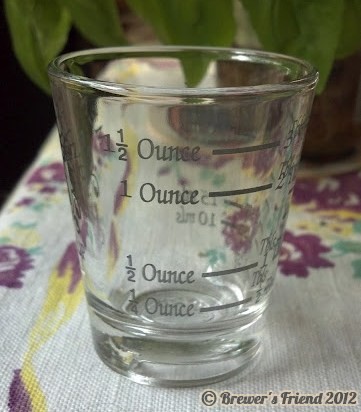 After mixing up my lemonade, I began by testing with 1 ounce of beer and then X ounce (or fraction) of lemonade. By using small quantities, I could make up samples quickly, not fill myself up, and most importantly not waste homebrew!

I’d recommend starting at a 1:1 ratio (half beer, half lemonade). Many people like it around that proportion. For this batch of shandy, we preferred a 2:1 ratio (beer to lemonade). We liked it more “beery” than “lemonadey” in flavor. My guess is that when I make it again, I’d likely use this same process. Depending on the batch of homebrew and the batch lemonade the proportions would change.

Here’s a shot of my homebrew shandy: 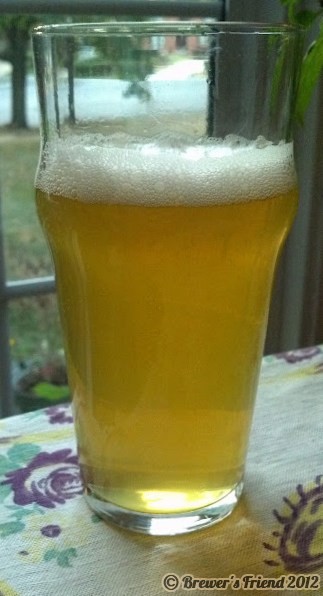 On to packing for the party – I put the shandy in 64 ounce soda pop PET bottles. Twenty-one (21) ounces was about ⅓ of that measure, so I put that amount of lemonade in the bottle, then filled the beer in on top of it. That mixed the two together nicely. It made it easy to transport, cool, and serve at the party. People who don’t typically like beer liked the shandy. They went through about 3 gallons during the evening. Next time you want to try something different, try your homebrew in a shandy or radler. Cheers!