Brewer’s are always on the lookout for a killer recipe, a brew day improvement, or a way to take their brewing to the next level. When we taste a good quality micro brew, we say to ourselves: “I could brew that… but first I’d make a few changes…”.

Home brewers are self sufficient, determined, creative individuals who say NO to macro beer and the oxidized defects it teaches our pallets! It is in the very nature of home brewers to improve their craft, push the limits, and at times go over the edge.

There is better, there is cheaper, and there is faster. 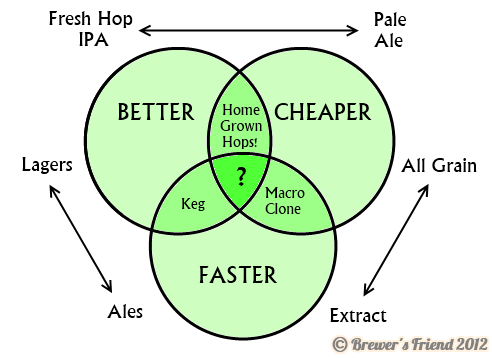 Pick two and you’ll be fine.

Faster – less time on brew day and less time in the fermentor. Ales win (2 weeks vs 6-8 for lagers)! Kegging speeds up the bottling process but has high up front costs! Extract brewing, though faster on brew day is more expensive because of the added cost of the extract.

Cheaper – can’t get much cheaper than buying 2-row in bulk and using your own hops. However if you want cheap home brew, you are looking at light bodied, low IBU beers. One of our fellow brewers is exploring the possibility of using feed corn to get his price per pint even lower.

Better – think what most new micro breweries are doing with their beers. It is all about rich flavor and complex bitterness. There is even a new beer category in the making: see our article on Black Ales.  The pursuit of better beer is a money spending time consuming operation.

A note on lagers:
For clarification, as a class of beers lagers are not better than ales. However, there is no substitute for a good lager beer. It is too bad lagers take 4-6 months to make. This is proven to me personally by recent experiments: Mocktoberfest and Kölsch.