This has to be one of my favorite beers for all time. I have brewed it about 5 times, and it’s just awesome. Talk about a ‘session beer’, that is something most people can drink all evening without a problem. My uncle, who is a German Protestant Minister, smelled the beer, took one sip, smiled, and told me in his thick German accent that it reminded him of beer at home. “Now… that is a good beer!” he said. He proceeded to drink the beer over the course of dinner, and then and ask for seconds. I was completely honored. Being a German, and in the US for the first time, he was honest about his opinion of things, some not so favorable. For example, he said the beer at Rogue was ‘very British’, and he did not order seconds there. My uncle is no stranger to beer. He explained during an annual festival, the Minsters ride tandem bikes through town and people hand them beer. Must be pretty cool.

This German lager, technically a Munich Helles (translates to Munich Light), leaves no heavy flavors on the tongue, but I argue it is robust and complex. The aftertaste has an elusive bread like, smoky quality I love in German beers. I believe this attribute is imparted by the yeast and the lagering process. The aroma and initial flavor has many light, sweet, fruity qualities, which come from the Hallertau hops. The finish is clean and crisp, as it should be in a larger.

All the ingredients in this beer are German (yeast, hops, grain), and they are easy to get at your local home brew store. My Hallertau hops were grown in Oregon, but it was close enough for my uncle, definitely close enough for me. 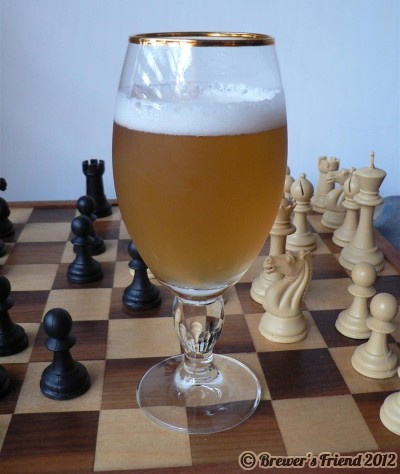 You can substitute towards Vienna malt to give it more honey sweetness and malt character.

I have tried substituting to Mt. Hood instead of Hallertau – it was still a good beer, more spicy, less aromatic, I would say a lot more boring (more like Coors). Tettnanger is another option, or a mix, but I usually put Tettnanger in my Oktoberfest because it is more spicy and less fruity than Hallertau. Saaz is another popular choice but I have not tried it.

First wort hopping may be of interest.

German Lager Yeast
I have used only White Labs WLP830, with great success, but I want to try some of the following:

Make sure to do a yeast starter for a lager!

Ferment for 3 weeks in the primary, before racking, pull it out of the fridge and let it warm to room temperature for 2 days (dialectal rest). Rack it, and leave it around 36F for 4-6 weeks.

I then keg it, force carbonate, and after about 3 months it is ready to drink. The beer tastes strange when it is green. It really needs the extra time to settle down. Be patient with it!