Brewers are always interested in improving the flavor and aroma of their beer, and there seems to be an endless array of techniques by which to accomplish this. One technique that is receiving much attention is first wort hopping. Also known as, and referred to as, FWH in most brewing circles and software applications.

First wort hopping is the method by which a hop addition is added to the boil kettle prior to lautering your grain bed. This allows the hop oils to steep in the 150F-160F wort during the lauter and then be boiled for the entire duration of the boil. There are complex reactions occurring in the hop oils during this low temperature steeping that are not well understood, but the effect is unmistakable. FIG 1. 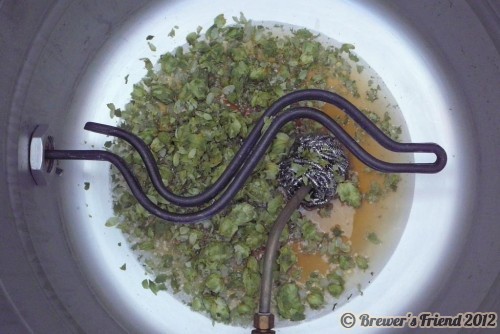 This process is well suited for beers where you would like to accentuate the hop aroma and flavor of your beer, for obvious reasons this is probably not a great match for a malty Marzen or malty Holiday Ale.. FWH’ing provides the beer with a much more refined bitterness and flavor, it is sometimes referred to as a “round” flavor, less sharp.

Though the hop utilization is generally about 10% greater than a typical hop addition added at the beginning of the boil, the bittering perception is many times said to resemble that of a 20 minute hop addition. For this reason, FWH’ing generally does NOT take the place of your bittering hop additions. There are a few simple FWH’ing rules, but these are by no means limits to FHW’ing, just general guidelines.

The afore mentioned “rules” are a general guideline for FWH’ing, but they are by no means the limits of this method. I have brewed an APA that uses ONLY a FWH addition for bitterness and it is one of my favorite beers, so you can feel free to experiment. Until you feel comfortable with the FWHing technique, try the afore mentioned “rules” and then branch out once you get a feel for what it contributes to different beer styles.

Partial mash and extract brewers can also experiment with FWH’ing in their beers!. The key here is to realize that the FWH is dependent on the hops steeping for a time in 150F-160F wort. In the case of a FWH’ed partial mash the hops could be added to the wort immediately after the grains are removed. Steep the hops for 20-30 minutes prior to the boil to mimic the time interval that would take place during an all grain lauter. After this steep, then boil as usual and make your usual hop additions.

To use this method in 100% extract brewing you will have to heat the water + extract wort to 150F-160F and allow the hops to steep in this warm wort for nearly 20-30 minutes, this will closely mirror that of FWH’ing in an all grain brew. After this steep, then boil as usual and make your usual hop additions.