Consistency is the Virtue of Homebrewing
Part 3: Process improvements

To brew a consistent beer from one batch to the next, it helps to have clean, sanitary equipment each and every time. This is discussed in depth in Part 1 of this series. If you’ve just stumbled upon this article, I recommend starting from the beginning. It also helps to have a detailed recipe, and a good set of process notes to act as a ‘road map’ of how previous batches developed. This was covered in Part 2. However the best notes and the cleanest equipment can still be undone if your brewing processes leave the door open for uncontrolled changes from batch to batch.

The key points for consistency in your brewing process are are:

The good news is, these process improvements in home brewing can be made incrementally and on a budget.

A frequent source of variation is the crushing of the grain; while it’s certainly possible to crush your own grain with household items, do-it-yourself techniques inherently lend themselves to variations. Most homebrewing stores that sell grain have a mill and will provide that service free of charge with the purchase. Be careful though, your local home brew store (LHBS) mill might have the gap set a little too wide. This site has an article on how to best crush your grains.

Most people start out doing extract batches with a kettle such as this: 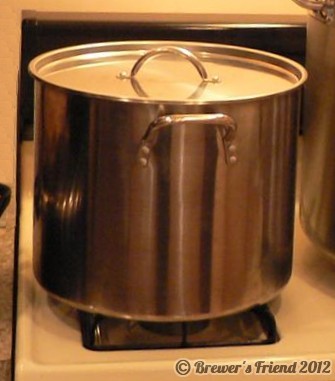 As you progress towards partial mash brewing or all grain brewing this becomes a limitation. The uninsulated metal pot has problems keeping the mash at a constant temperature. It requires a lot of attention to mash with (eg: stir, remove it from heat, stir again, then re-heat, etc). Over the course of the 60-minute mash time it is a lot of work to keep the mash in the 145F-158F degree temperature range. While this gives a good mix of alpha and beta type starch conversion for any given beer, it doesn’t give very consistent results from batch to batch. Switching to an insulated mash tun (converted from a cooler with a kit found at most homebrew stores) not only removes the stirring and temperature adjustment, it also means every batch of beer mashes the same every time. As we mentioned in the record keeping article, noting the temperature of the mash, and monitoring it closely is key. 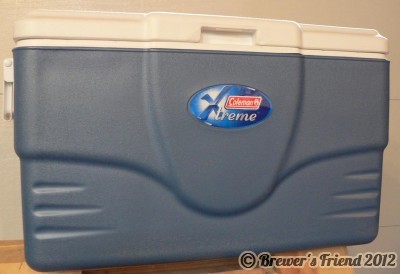 Water chemistry in mashing is also a concern and there are a lot of details involved. Generally adding a teaspoons or less of the correct brewing salts can help bring flavor ions into balance and the cost is negligible. This site has a water chemistry calculator and a write up that details water chemistry in brewing.

All-grain brewers also needed to sparge or lauder grain, another process that improves with practice. At its most basic, the process of sparging is pouring water over mashed grain to wash the remaining sugars and non-fermentables into the wort. Originally this is accomplished by simply pouring water over the grains, called batch sparging. Again here, noting time it soaks, the amount of water, and the temperature is crucial to success. To get even more consistent there is fly sparging, or the use of a RIMS/HERMS system.

After boiling the wort, it needs to be chilled to below 80F (26C) before the yeast can be added. The easiest method for chilling is simply to allow it to cool; unfortunately, this method is not only slow, but means that the wort is exposed to air (and thus wild yeasts, molds, and bacteria) for a longer interval. A wort chiller (below) speeds up the process considerably, reducing exposure and resulting in a more consistent brew week to week. 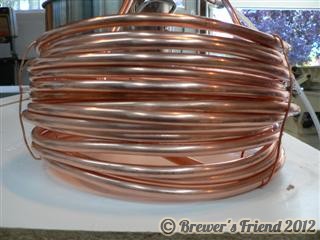 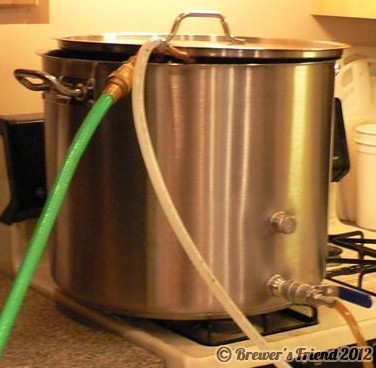 Most homebrewers start out with a plastic pail with a simple lid, and this works very well for the first few batches and some swear by this approach. Upgrading to a glass or plastic carboy is more expensive, but with the addition of a simple airlock, you’ve just refined your process again. Glass vs. plastic fermentation has been debated in the brewing forums in the past. This site has an article explaining the pro’s and con’s.

The temperature of the fermentation is also key.  Yeast produce different flavor profiles at different temperatures, generally the higher the temp the more interesting the flavors will be. This can be a plus or a minus depending on the style but it is another variable to worry about in consistency.   Some home brewers have built their own insulated chamber to control for this.   Paying attention to what time of year a brew was done is a good way to start correlating temperature of fermentation with your results.  There used to be a rule in Germany that forbid brewing after summer started because they knew the beer would be ruined by the heat – of course back then they did not have climate control.

When transferring the wort to the fermentor it needs to be aerated but after that it should not be exposed to oxygen. If it does get exposed to oxygen it will develop off flavors in the bottle over time.

When possible, setup your equipment so it can be drained by gravity. For example, if your kettle has a ball valve on it, then you can drain the kettle into the fermentor quite easily through a sanitized hose. If your fermentor happens to be a bucket, you can fit it with a spigot (before hand) and similarly rack to the secondary or bottling bucket by opening the valve and draining through a tube. Bottling buckets with spigots are extremely handy. As for racking out of a glass carboy, an auto siphon is an easy way to go. If you have to manually raise the container up to the table, make sure to give it a few hours to settle first.

All of these improvements can be done separately. Each improves one step of the brewing process, removing uncontrolled variables and ensuring that the only changes from batch to batch are the ones you, the brewer, intended. There’s nothing wrong with the basic starting kit, but as you progress in the hobby, you’ll find each of these improvements results in a better beer overall.

Achieving consistency can be a long road. It involves developing good cleaning habits, practicing strong record-keeping discipline, and gradually improving your processes. The reward for being able to brew beer that tastes the same from batch to batch isn’t just a consistently drinkable beer. It also means that the results of experimentation can be clearly identified, meaning each new batch means more knowledge for you, the homebrewer.