Ever since I saw the movie Beerfest, I wanted a boot shaped glass to drink out of. That day has finally arrived. This was a Valentine’s day gift to me from my wife. She is great! It has a Bavarian crest on the front, suitable for the home brew German lagers I intend to load into this sucker. 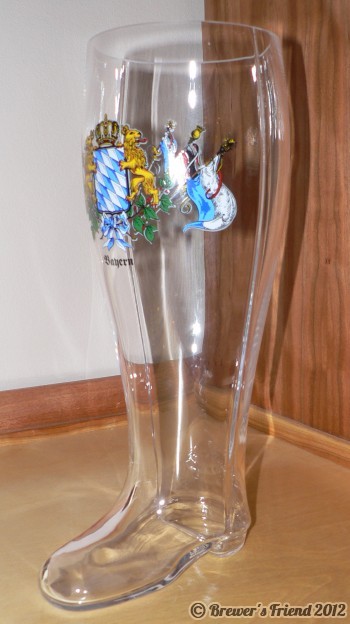 The beer boot says it is two liters, but it holds more than that. To the top it almost holds three quarters of a gallon which is closer to three liters. In terms of 12 ounce bottles, we are talking over a six pack worth of carrying capacity in one glass. PROST!

If you chug beer out of this glass with the toe pointed up, an air bubble will form causing beer to splash in your face. Towards the end of the night when things are nice and loopy, I can see this design feature being the source of many a good laugh in pubs that serve beer in a boot. The correct drinking technique is to point the toe to either side, instead of up or down.

The movie Beerfest explains the use of the beer boot in detail and it is worth watching at least once.