To everyone who is using glass carboys, you may find this of interest.  This is a re-post from a wine maker we know in the area who had some serious trouble with glass carboys breaking lately!

This morning I discovered a small pool of wine underneath a 5 gallon glass carboy I was using to put some Merlot through malo. I immediately racked off (without moving the carboy) into a PET 5 gallon and discovered a small crack running halfway around near the base. This is the THIRD time this has happened to me. The first was last year when I was carrying a carboy to the kitchen, I heard a small click and the bottom suddenly came loose in my hand, I managed to get to the sink before the bottom dislocated and wine ran EVERYWHERE. I got cut but was lucky to avoid anything serious. A couple days later I noticed a carboy with a small pool of wine at the base, foolishly tried to slide it to see if the pool was just a spill and the base separated once again, with the subsequent loss of the entire 5 gallons, fortunately into the bathtub. I realized that these 2 carboys were part of a batch of 3 that I bought from someone used, though they appeared to be in good condition, and I destroyed the third one.

Since then I’ve worn welder’s gloves when lifting and have otherwise BABIED all of my carboys, setting them down very carefully and avoiding subjecting them to temperature extremes, except for cold stabilizing when I put them outside on the patio, each on wood platforms in order to avoid getting the bottoms too cold. All of these 3 failed carboys have been 5 gallon CRISA’s, which are manufactured in Mexico and are commonly sold at wine/beer supply houses. I’ve looked them over and notice that they generally have an uneven nature to the thickness of the glass at the base, probably a sign of poor manufacturing technique, and that may cause them to have uneven structural integrity or could cause differing amounts of expansion/contraction with temperature change, eventually resulting in failure under load.

Below are some pictures, I’ve got a number of these but will destroy them all now. I have had good success with the 5 gallon Vintner’s Harvest models sold at Main Street and also the 6 and 6.5 gallon versions made in Italy. At this point however I’m moving to PET (plastic) carboys, since I’ve now heard of a number of very serious injuries people have sustained carrying glass carboys, and since now PET is a proven, safe material to make wine containers out of.

So, not saying all glass is a problem, but please be extra careful if you lift them when they are full. Buy some heavy gloves! 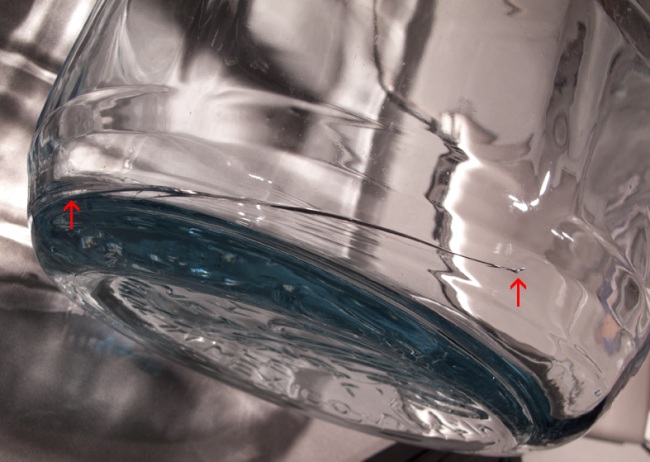