When I first started kegging, I soon realized how much simpler taking beers to parties would be. I’d take ONE big container of beer, and dispense it. No more super heavy coolers of glass beer bottles to lug over and bring the empties back for cleaning and reuse.

Until this fall I’ve been using a picnic tap to dispense my kegged beer when I’m away from the keezer. I have used a big metal trash can lined with a contractor-grade extra thick trash bag to hold the keg(s). I pour ice ½ the way up the kegs to keep it at dispensing temperature. If I’m only using one keg, that’s a lot of ice (30 or more lbs) to get the keg properly surrounded with ice.

We have a big party at our house to celebrate Fall. Typically we have 60-70 people show up. We kick 2 corny kegs of beer and most of a keg of root beer. I had wanted a better way to dispense the beer, and had been using a Craigslist trawler for months to see if I could find an appropriately priced jockey box.

After about 8 months of waiting, I scored a major Craigslist deal on a 2 tap jockey box that was set up for commercial Sanke kegs. It was a plate chiller type, and happened to be a 3 beverage chiller with only two taps being used. It included a 20lb C02 tank (almost full!), regulator, jockey box, blue tub, an empty pony keg shell, and extra fittings.

If you don’t already know what a jockey box is, I’ll bet you’ve seen them at brew fests, music festivals or fairs, etc. Here’s a picture: 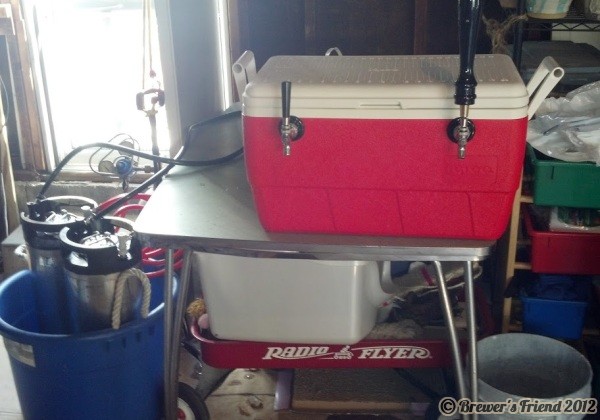 Basically it is an Igloo cooler that has either a cold plate or a stainless steel coil inside. The plate/coil is surrounded by ice and as beer passes through the plate/coil, it is chilled to serving temperature. The keg of beer need only be kept at about 50-60 degrees – the jockey box will take care of the last 10-20 degrees. On a hot day, that is a big savings of ice! It is also convenient because you can provide taps to make serving easy. It’s a great way to serve a lot of beer with less ice, and elevate the taps a bit to make serving more convenient and potentially less messy..

Two corny kegs are on the left sitting in the blue plastic tub. Right behind the tub you can see the regulator and C02 tank peeking out. There was a simple ‘T’ in the C02 tubing coming out of the regulator:

With a small investment in plugs for the 3rd beverage openings and replacement fittings for corny kegs I’d be ready for our big open house, Thanksgiving, New Years…well, you get it. Any party in the future. I got the fittings from my LHBS.

Heres a shot of the inside of the box: 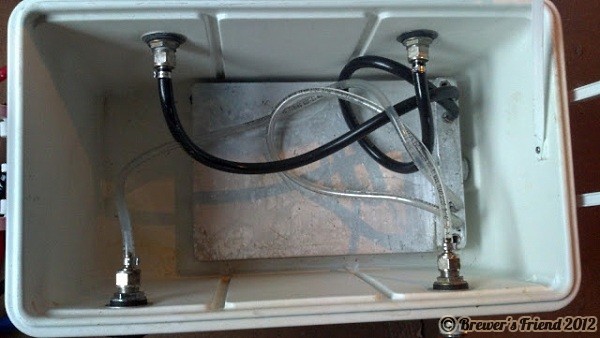 On the outside corners of the plate you can see the unused 3rd tap. The plate is aluminium on the outside, and it encases stainless steel tubing on the inside. It’s surprisingly heavy. Warm beer goes in the clear tubing, passes through a lot of stainless steel tubes inside the plate, cools off, and comes out the black tubing to the tap.

Before using, I needed to cut off the Sanke fittings: 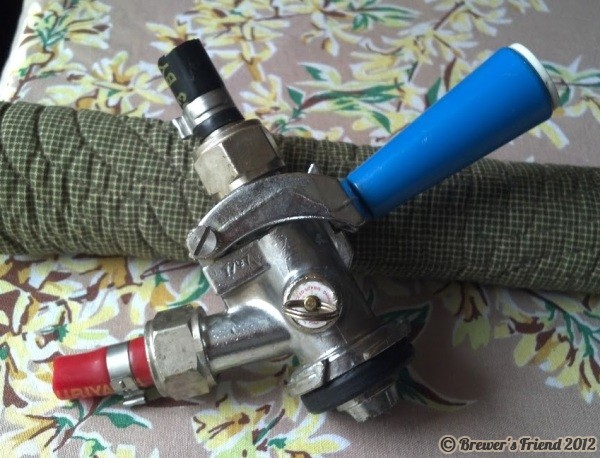 I also needed to plug up the 3rd beverage pass so that it would stay unspoiled in case I wanted to install a 3rd tap someday. 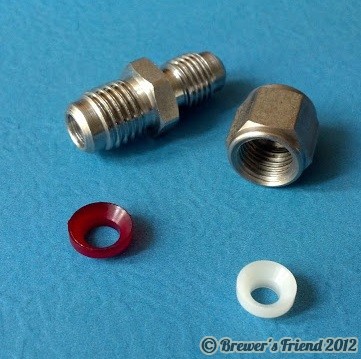 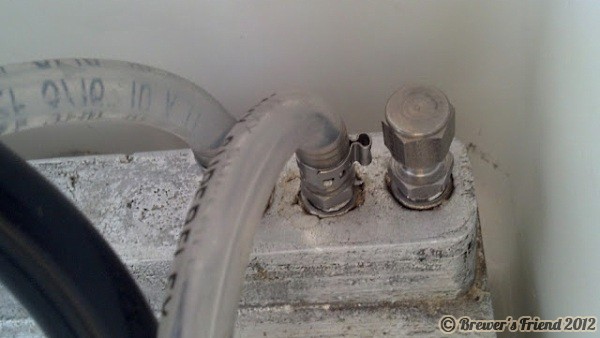 In the picture above, the two tubes are the warm beer input tubes, the outside the the 3rd beverage plug.

When using a plate type jockey box, you want ice to cover the cold plate, but you DO NOT want the plate submerged in water. A coil jockey box can be submerged in water, but not a plate. Always keep your Igloo cooler drain open if you have a plate. You can see the grey bucket to the right of the box on the floor to catch water draining out of the cooler.

After replacing the fittings to accommodate corny kegs, I thoroughly cleaned all inputs using Beverage Line Cleaner (BLC). I did a quick test the week before the party to see what pressure delivered a good pour. It was different than my picnic tap.

The jockey box worked great at our fall open house and Thanksgiving. We’ll use it late this year for another gathering.

Next I’m going to experiment with a paintball can adapter fitting to see if a canister can push a keg or two. That would make it so much easier – no big CO2 tank to lug around, and the paintball can and the regulator can sit in the cooler for transport.

Also, it’s important to run beer though the lines and out the tap BEFORE putting ice on the plate. If you used water to clean the lines or water with BLC or similar in it, you might freeze up the BLC in the plates and you wouldn’t be able to serve until the iced BLC melted back to liquid. The order is: drain cleaning fluid/water from you lines and out the tap until you see beer, add ice to plate/coil, and serve.

It was a great buy and it made our fall gatherings easier to host. If you have a lot of parties or attend parties and need to serve a lot of people, a jockey box might be a good alternative. Who knows – you might score one on Craigslist like I did – good luck!