Each season has at least one beer style that it is known for, if not several. This season an Oktoberfest / Marzen recipe has been selected. This is part TWO of a four part (season) series about these seasonal brews. Spring is quickly approaching, although much of the country is still in the grips of a deep freeze, it is time to start thinking about warmer days, melting ice and snow and brewing outdoors again!

When I think Spring, I think about March… in like a lion and out like a lamb as my grandmother used to say. When I think of March, I think of Oktoberfest! What…? Maybe some explanation is necessary for some of you. The beers served at the traditional German Oktoberfest in the month of October are actually brewed in the month of March, which is whey they are often called Marzens, or Marzenbier which means March Beer, in German.

Prior to modern refrigeration equipment, cold storage of beer consisted of underground caves and stone cellars. Often these storage areas were near ponds or bodies of water so that ice could be cut during the winter months and used for cooling during the summer months. Marzens, or Oktoberfest lagers, were brewed in the month of March and then stored through the spring and summer months until the Autumn festival.

Oktoberfest/Marzen (5 gallons)
This lager is malty, toasty, smooth, lightly hopped and perfect for those late Autumn gatherings around the fire pit. Brew it now so that it is ready for Oktoberfest at your home this Autumn!

YEAST:
White Labs 820 Oktoberfest/Marzen
Since this is a lager a starter is needed, click here on information about making a yeast starter. 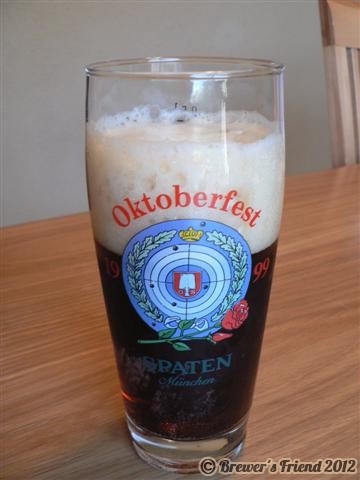