While hops can be added to the boiling wort for as little as fifteen, ten, or five minutes to impart aroma and flavor, true hop-heads know the best approach to really punch up the hop profile of a beer is dry-hopping. Because hops have gone up in price over the last few years, dry-hopping your home brew is something of a luxury, and it’s especially important to make sure you do it right.

Dry hopping refers to adding hops to the fermenting beer and letting them soak in it for a period of no less than 10 days. For the typical five-gallon batch of home brewed beer, one to four ounces is the appropriate range of hops to use. In dry-hopping, as with flavor and aroma hops, the strain of hops used is crucial. Since the goal is to increase the hop character, the IBU and Alpha values are much less important.  For example, Amarillo imparts grape fruit notes, Centennial adds citrus, and Nugget is herbal.

The key to dry-hopping (beyond picking a strain you like) is timing. The most common error in dry-hopping is adding the hops immediately to the cooled wort. DON’T! The initial fermentation period is an active one, and the hops (which will float on the surface of the beer for about a week or so) will be highly agitated as a result, with some of the pollen and other aromatics (and thus flavor & aroma) being quite literally ‘blown out’ of the beer. Waiting until the initial blow-off is complete (about 3-5 days) removes this risk. Additionally, the alcohol in the fermenting beer will strip off some of the acids and flavor from the hops, so adding the hops later (and letting them soak longer) gives a better, richer flavor.

The hops are added to the beer without boiling or pasteurization first. While this may seem like an infection risk, the surface of the dried hop provides a poor environment for wild yeasts and bacteria, and infection from hops is rare enough to be inconsequential. Some home brewers place the hops in a hop sock for easier collection, but unless you intend to rack the beer after the hops have been added and continue dry-hopping, this isn’t necessary. It won’t affect the product, but it will save you a hop sock.  Tips on how to fully submerse the hops are provided below.

When the hops float on the surface they are not as well utilized. However you don’t want them stuck in the trub at the bottom either. To overcome this problem, get a muslin bag or similar, and add something inert to it so it is weighed down. Then tie a string around the hops bag so you can control how far down it drops. That way the hops will be suspended below the surface of the beer. Hops are quite buoyant so make sure to provide enough weight to sink it. In this case, glass beads are used: 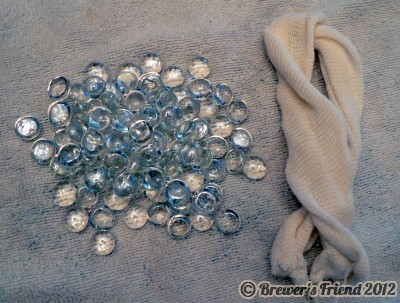 These were enough to keep 1 ounce of loose leaf hops below the surface.

When primary fermentation is complete and the krausen is dissipating dry hopping can begin. In this case I did not bother to rack the beer, I just added the dry hops to the primary. First I sanitized the bag, beads, and string. Then I add the right amount of hops and beads into the bag and tied it off. Then I tied a string made of standard sewing thread around the top of the bag. I opened the cork on the carboy and pushed the bag inside, careful to keep hold of the string. When the hops were submerged, I put the cork back on, and tapped off the string. I let it sit for about ten days, then kegged. Delicious! 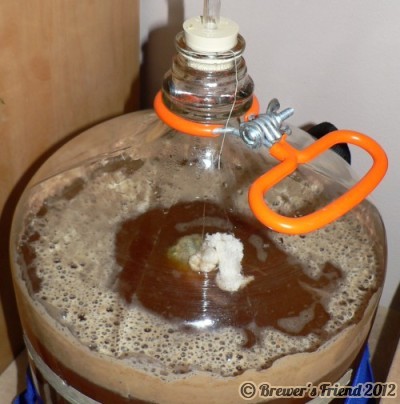 It is also possible to dry hop in the keg. Loose leaf hops or pellets can be added directly to the keg, or weighted down in a bag similar to above. If you don’t have them in a bag expect to get hops particles floating in the beer. Some hop heads are totally fine with this. The bag also makes cleanup easier.