“No Chill” is a term used for the Aussie method of transferring HOT wort into a sealed container and letting it cool gradually, over a period of time. Aussie brewers generally pitch the yeast when they see fit to do so, sometimes days or even weeks later. This method has evolved out of the necessity to conserve water in some areas of the world, such is the case in Australia.

By utilizing this method I hoped to:

The “PLAN”: Brew a recipe that I have brewed many times before, something low ABV and lightly hopped so that any real flaws in the flavor will be very apparent. I brewed the beer normally except for a small change to my late hop additions. The planned OG is 1.040, FG 1.011 and comes in at a light 18 IBUs.

There is still a noticeable amount of hop utilization happening in the wort as it cools in the HDPE container; at temperatures above 170F this is more pronounced and will affect the total IBUs of the beer. For this reason I have adjusted my late hop additions to keep them from bittering the beer.

The CONTAINER: A 6 gallon HDPE container from www.USPlastics.com ($15) and a #11.5 drilled stopper ($2.25) to accommodate the large opening where the cap currently exists. Aside from this, the HDPE container is simply outfitted with a stick on thermometer to indicate when the temperature is appropriate to pitch the yeast.

The PROCESS: After the boil I added what remained of my late addition hops to the HDPE container, those that were not moved to FWH. I gently whirl pooled the wort in the boil kettle and let it stand for 10 minutes to allow some of the material in the wort to settle to the bottom of the kettle.

The kettle was drained into the sanitized HDPE fermentor, once filled, the cap went back on tightly and I gently turned the vessel on its side to allow the hot wort to further sterilize the inside of the container. I then placed the container in my 65F fermentation freezer for a 24 hour period to chill. 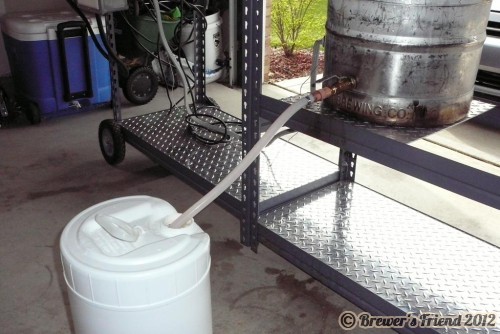 When I drained the kettle I saved about 1 quart of the wort to create a 24-hour yeast starter. This is referred to as a RWS, or Real Wort Starter. NO MORE DME! 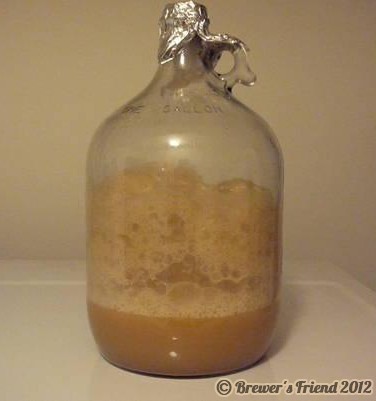 After 24 hours: The wort had cooled to yeast pitching temperatures, so the fermentor received a good shake to adequately aerate the wort. Once this was complete, the yeast starter went in and the cap came off so that I could affix the stopper/air lock in its place. Signs of a healthy fermentation were visible in the air lock within 5 ½ hours of pitching the starter.

14 days later: The fermentation is complete, the hydrometer is showing the target FG of 1.007. Very light, very crisp! The beer is transferred to an awaiting keg for a couple weeks of cold storage and carbonating. The cold and flat beer has a distinct “twang” to it… much like any green beer, time will tell if this brew will have any off flavors from the “no chill” method.

28 days later: After much anticipation it is time to pull the tap! This beer is still young, it has not completely cleared, though it is clearer than it was when first kegged. The aroma is slightly malty, slightly hoppy (Cascades) but very mellow, just as this Haus Ale has been in the past (4) keggings while using an immersion chiller. The flavor… it is again identical to previous batches that were chilled in the conventional manner. It is very light, slightly citrus (Cascades) and very easy drinking. There are no indications of DMS (a corn like flavor) and the hop profile is identical to previous batches that were chilled conventionally.

Following are the guidelines I followed to reduce the perceived bitterness of hop additions.