For the first time in many years I experienced a bad batch of home brewed beer last month. I am sharing this with the community so you can avoid my mistake. It is embarrassing! Being out the time and money for the batch and having an empty keg sucks. However, I learned a couple things I can pass along. This bad batch changed my perspective on yeast re-pitching, updated my definition of what a healthy fermentation is, and helped me clean my equipment better.

The spoiled batch, which had been in the keg for about 2 weeks had the following properties:

What the heck! Had I gotten a lax on sanitization? Was my yeast bad? Was there something in the brewing process that lead to this? I asked some home brewing experts and they attribute this to a yeast deficiency – either an infection, or bad yeast. It turns out there were two main factors, repitching of yeast and a dirty spigot in my fermentor. While I am not sure which did more damage, I have evidence of both.

Here is what the carboy looked like, note the ring: 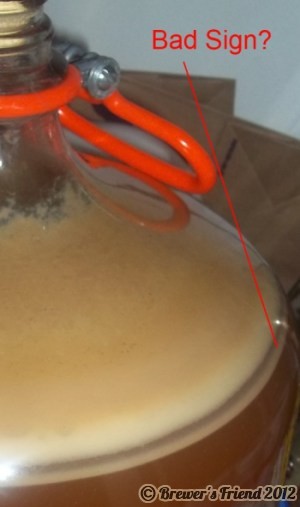 If you have a goopy ring around the krausen layer you might be in trouble. The off gases from the fermentation also smelled ‘cheesy’, which tipped me off there might be a serious problem.

For what turned out to be the spoiled batch, I opted to re-pitch yeast (Wyeast Northwest Ale 1332) from a previous batch of IPA. The harvested yeast was in the fridge in a ball jar for about 2 weeks. That IPA was already in the keg and was drinkable, but it was not my best batch ever. It had a thin finish and there were some light ‘chemical’ flavors present that come and go from sip to sip. I figured at the time, the beer was just green – and it did improve a lot after a month went by. When I kegged the IPA and harvested the yeast, it looked and smelled fine, a fresh bready aroma was present. That meant it is good to go right? WRONG!

Something funny happened with the fermentation of that IPA. One night I forgot to set the furance at 64F, and instead turned it all the way down to 58F – so it got pretty cold in the house that night. It turns out NW Ale 1332 does best between 65F and 75F. In effect, that night the yeast were really stressed. I didn’t think much of it at the time. I do recall the fermentation slowed after that. I also left the IPA in the primary for 23 days, without racking, and then harvested the 23 day old yeast cake. In retrospect I should have spent the $4-$7 for a new yeast pack. Even though that yeast cake smelled good at the time, it was no longer to be trusted given its age, and the temperature fluctuation.

I gathered two ball jars from the yeast cake. Now a month later, on inspecting the second ball jar, there is a thin line of black mold growing on top. YUCK! 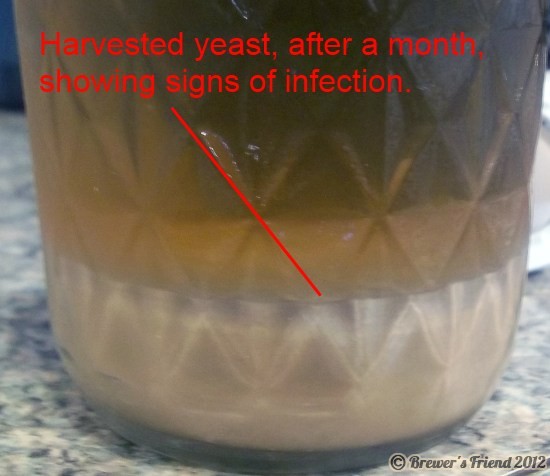 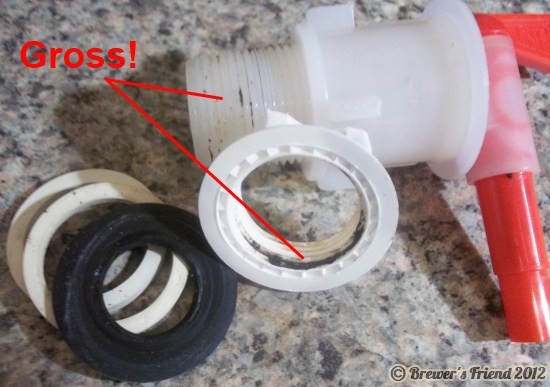 It had probably been over 3 years since I setup that bottling bucket and spiot. Whoops! No doubt whatever mildew / mold / germ was living in there is not good for the beer. I terminated it with extreme prejudice – a strong bleach solution!

After I soaked everything, I thought I was ready to go again, but then I noticed, inside the sealed part of the spigot, there were some faint black spots. It is hard to see in the picture, so I enhanced the second one. 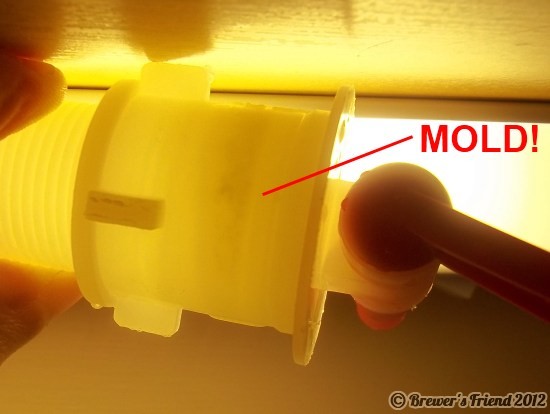 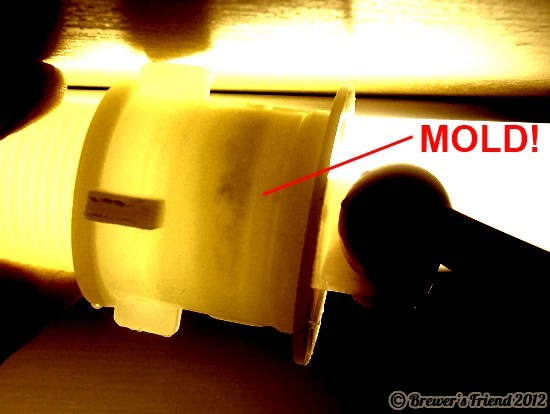 The mold / mildew, whatever it is, is growing INSIDE the sealed part where the spigot rotates. There is no way to scrub that section. I am looking into getting a different type of spigot that does not have this design flaw.

All this time I had thought I was being a good sport by re-pitching yeast. That is what the pro’s do right? Well, it turns out I did not realize the risks associated. I wrote an article awhile ago that praises yeast washing, and another on yeast repitching. I have updated those articles to point out what was learned here. The time it takes to harvest and clean the yeast (15-20 minutes), plus the risk is not worth the $3 savings it offers! I should have known that…