Upgrading to electric brewing makes home brewing a real pleasure. This article covers the details, including a 30 amp GFI’d outlet, drilling holes, and ordering ~$280-500 worth of parts. Dave Knott at HighGravityBrew spent years perfecting electric brewing equipment for his own use. He sells everything you need online and through his home brewing store in Tulsa, Oklahoma. HighGravityBrew saved so much time and headache! I highly recommend their products and I am writing this article as an acknowledgement of their quality, and a thank you.

With electric brewing a heating element is mounted inside the kettle. It works the same way an electric water heater works. Instead of heating the kettle from the bottom, the wort boils from inside. Here is how my boil kettle looks: 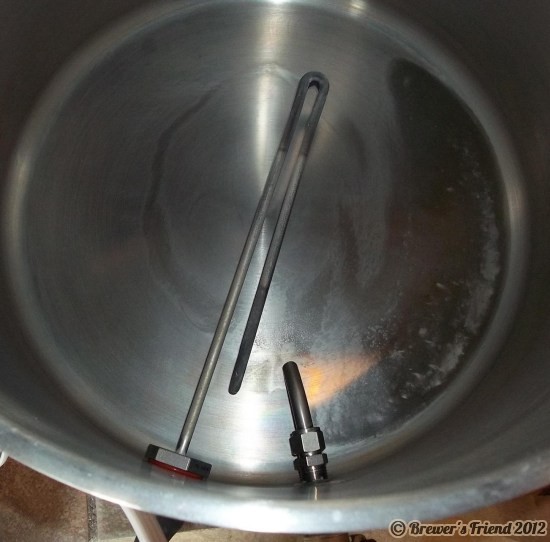 The elements can be purchased from HighGravityBrew:

For the Boil Kettle, they recommend a 4500 watt unit.

Getting the element into the kettle requires drilling a hole and using either a welded or weld-less fitting. Weld-less is a simpler option that worked well for me.

Step 1 – Drilling the hole:
This I did myself by carefully marking where I wanted the hole, relatively low in the kettle, such that the element would not hit my dip tube. On the mark, I took a center punch and made a dimple so the drill would have a place to slot into. Lots of oil, walled off with a damn made of plumber’s putty, and a standard hole saw made the cut in under a minute. For the HighGravityBrew elements a 1.25″ hole needed to be drilled. I spent some time fretting about the bit type. Some sites suggest using a stepped bit (aka unibit), but they are expensive. For the thin wall of my kettle (which was from MoreBeer / Polar Ware), a standard hole saw worked fine. 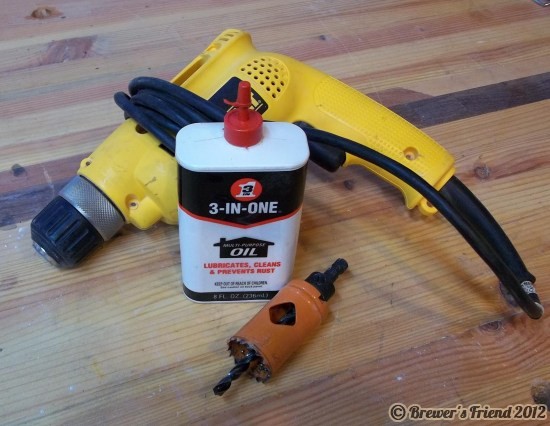 In the case of a welded fitting, a coupler is welded over the hole. The element slides through it and screws in to female pipe thread on the coupler. Welding shops were quoting around $75, plus the couplers.

A 30 AMP GFI breaker is required. Get it installed by a professional. My brewery has a 4 prong dryer outlet which the controller plugs into. The controller is described in the next section. 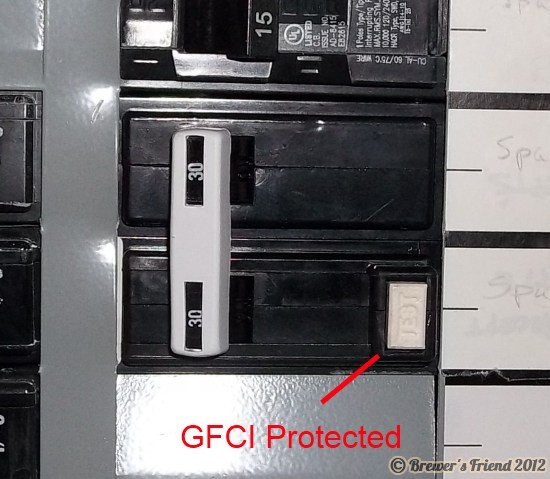 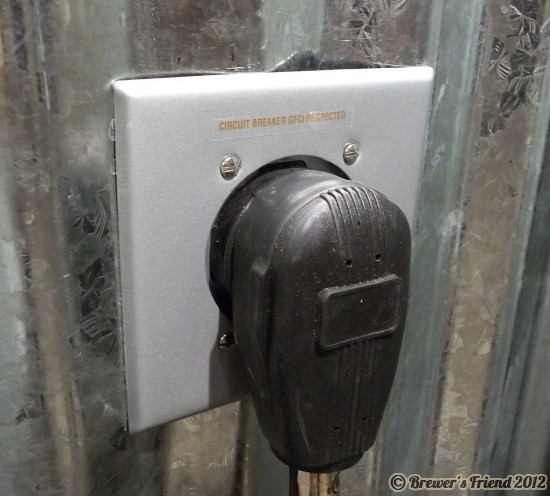 HighGravity brew has a couple turn key options. I bought the ECB II for $300. With this unit I can vary the power using the knob. The ECB II also has a bypass for a temperature controller. This allows the element to be turned on or off by a temperature probe. That way a HERMS system can be built with the ECB II as its heart. 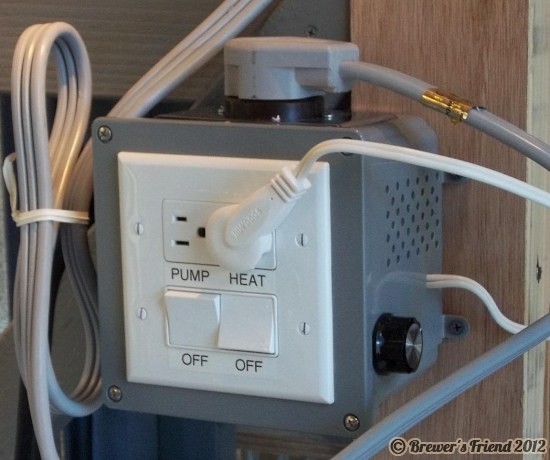 HighGravityBrew also has a $200 model, which doesn’t not allow a temperature probe to be hooked up to it.

I had to redesign my wort chiller so it would not sit on or bang up the element. My solution was to wrap another 50 feet of soft copper tubing around a 4″ PVC pipe and form it into the following: 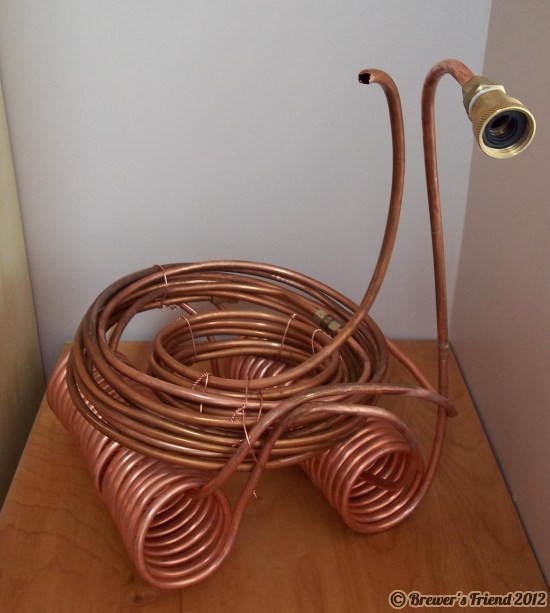 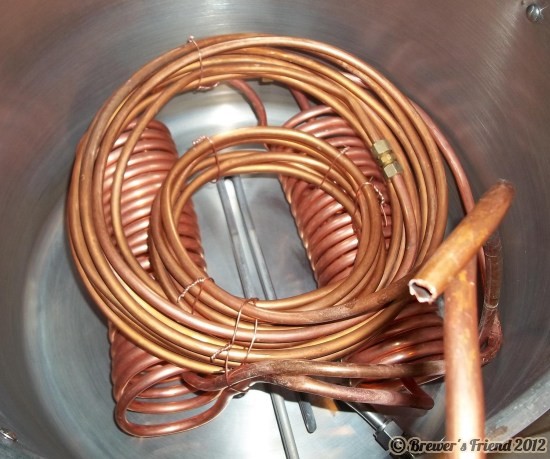 Plate chillers and counter flow chillers are another alternative. I researched those quite a bit and decided against them. Stay tuned for an article on that.

On the highest setting, the elements will increase temperature at the following rates: 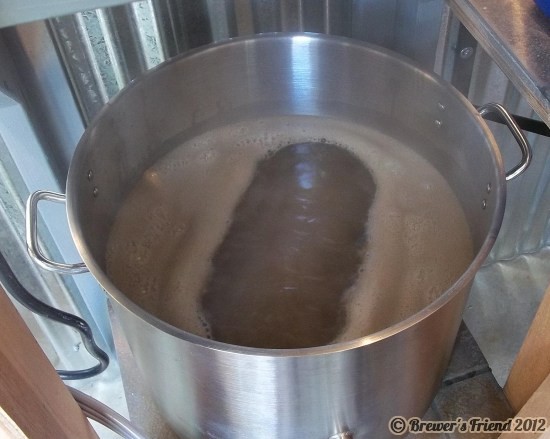 Strike water is ready in under 30 minutes. Going from mash out to boil takes under 10 minutes! After a rigorous boil starts, the dial can be set back to around 60% to maintain a steady boil.

In an electric brewery, the cost of boiling is measured in kilowatt-hours (kWh). In the northwest the price is around $0.10/kWh, but in Hawaii it is higher. Check your electric bill to be sure.

Total electricity cost for a standard batch of beer: $1.20

Minimal cost savings aside, eliminating propane from the brewing equation is just awesome. Exhaust fumes are no longer a concern. There is no worry of a seal or hose coming loose and burning the shed down. Best of all, no more lugging the tanks around and having to get them refilled. If you are brewing indoors on a propane burner, seriously consider this upgrade. I have enjoyed brewing even more. I did not think that was possible. Electric brewing is safer, cheaper, and more environmentally friendly.