Pacman is the name of the yeast used by Rogue Brewery of Oregon. Rogue makes Pacman available in limited quantities to home brewers from time to time.

Originally, I didn’t get the name. Were they being cute? Does it ‘pack’ a punch? No, I was not thinking literally enough. While on vacation it dawned on me. The name was inspired from the old arcade game! It helped that weeks before my vacation I had played the Pacman game on Google (https://www.google.com/pacman/). What Pacman does in the game, and what brewer’s yeast does in the wort are pretty similar.

To help us all remember, I created a somewhat crude and juvenile drawing. This makes for a basic lesson in ‘God Is Good’, aka yeast, and how they turn sugar into alcohol: 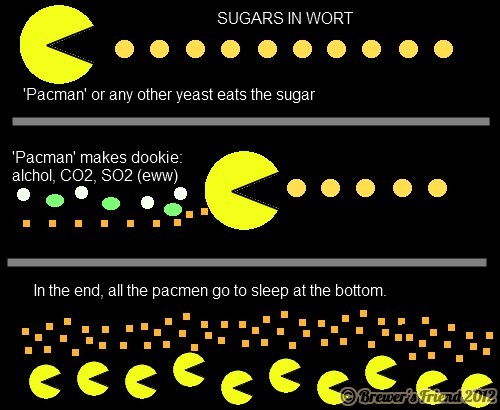 Our big hungry yellow hero ‘Pacman’ is a yeast cell (technically a fungus). Him, and thousands of his brothers and sisters eat their way through sugar molecules in sweet wort. As they consume the sugar they produce alcohol, carbon dioxide, and some sulfur dioxide. Yes, alcohol is fungus crap. Poetic. The SO2 is why if you take a sniff from the airlock it can smell a little funny. This varies by yeast strain. Normally I smell hop aroma from my airlock, but I have smelled ripe odors from Hefe and Kolsch strains in particular.

When the party is over there will still be some sugars remaining. Some brews, like dry mead, use a yeast strain that goes all the way to a final gravity near 1.000 (no sugar left). Each yeast strain has a different alcohol tolerance and capacity for digesting complex sugars. The yeast eat themselves into an environment they cannot survive in. That’s okay though, they can be harvested off the bottom and saved for another batch or immediately repitched if all was well with the fermentation.