Here’s a friendly notification to all brewers who own dogs:

If a dog eats hops it can be fatal!

A study conducted by the National Animal Poison Control Center, University of Illinois in Urbana in 1995 showed this to be true. Of the eight dogs, seven were Greyhounds, one was a Labrador Retriever, all cases were fatal. The dogs had ingested spent hops. Dogs are attracted to the sweet wort covering the hops.   Cases of dogs eating raw hops and getting sick or dieing have been reported on brewing forums, but this appears to be rare and no studies have been done. 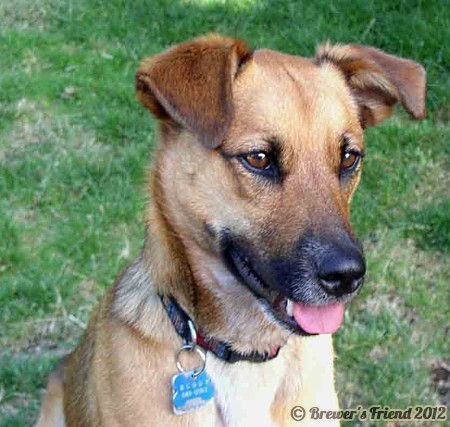 When a dog eats hops the onset of Malignant Hyperthermia occurs. Not to be confused with hypothermia, hyperthermia means the dog’s body overheats uncontrollably (2 degrees Fahrenheit every five minutes). The dog will begin panting heavily, display a rapid heart rate, and may have muscle spasms. This page has a report on how a dog was treated by a veterinarian in 2002 for such an incident: https://www.bme.ogi.edu/~ericwan/DOG/hops.html.

Types of dogs that have been impacted:

Other breeds are likely susceptible to hops toxicity.

The best way to prevent against a dog eating hops is not to compost the spent hops or trub. Put the spent hops and trub in the trash or down the garbage disposal. Another approach is to setup a composting box so the dog can’t get into it.

When it comes to growing hops, if you want to be extra careful, plant them in an area the dog is not allowed in. If your dog is a digger or chewer pay extra attention to where the vines are planted. Also be careful during harvest when the cones are being collected and potentially dropped on the ground. A relative of mine has a dog and grows two hop vines in the back yard. This particular dog has an addiction to playing fetch and has never shown an interest in the vines or the hops.