Mashing and lautering are terms used in all grain beer brewing to describe how brewers go from malted grain to wort in the kettle.

Mashing is the process of of creating sweet wort. We are lucky because in today’s world we start off with malted grains. Malting is a time intensive process best done on a large commercial scale. Malting prepares the grain for mashing and makes the process simple and easy. Nature pretty much does it for you. Mashing starts by combining malted grains with water at specific temperatures. The grains have to be crushed or milled first to enable the water to seep in. The hot water activates enzymes in the malt which triggers starch in the grain to convert into fermentable sugar. In general, the target temperature is between 150 and 158 F (65-70 C), held for one hour.

Mashing is performed in a container called a mash tun. It could be a modified picnic cooler, a converted keg, a kettle with a false bottom, or even a plain bucket. Heat retention is important and that is why coolers work so well.

Mashes are conducted on a temperature rest schedule. The default mash schedule is generally for one hour, between 150 and 158 F (65-70 C) at a water to grain ratio of 1-2 quarts per pound. For example to get a ratio of 1 quart per pound with 10 pounds of grain, add 10 quarts of water (2.5 gallons).

This site has a mash schedule calculator here which will help you plan infusion style mashing.

Depending on the grain or the type of beer, there may be several temperature levels, called rests, to proceed through. For example a less modified malt (such as Pilsner) may produce a higher yield under a schedule such as: 122F for 20 minutes, 140F for 20 minutes, and finally 155F for 20 minutes. A more advanced approach called decoction mashing involves removing a portion of the mash, boiling it, then re-adding it to the mash. This process of boiling and recombining may be repeated several times during a decoction mash. These advanced schedules are designed for total control over the beer, and compensate for less modified malts. Most malts out there (such as Americal Pale 2-Row) are highly modified and convert easily with the standard one step rest schedule lasting 60 minutes. Advanced brewers explore these more challenging and time intensive mashing techniques to produce a certain style, or fine tune a recipe to be totally authentic.

1. Start off with your empty mash tun: 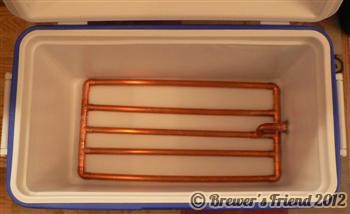 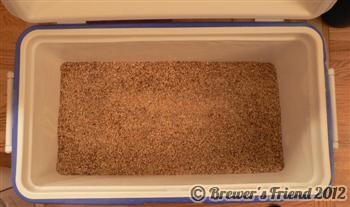 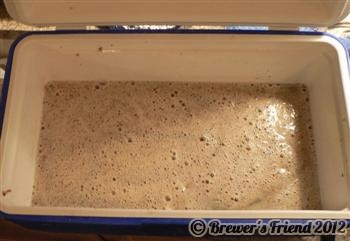 Now you are ready to drain the wort, the process called lautering which pretty much does itself if your manifold is well built. Lautering is the process of separating the spent grain husks from the sweet wort. After lautering the sweet wort ends up in the kettle and the boil begins!

Other terminology in mashing:
Crushed grain is also referred to as grist.

Mashing-in is when the water is first added to the grist. This initial water is called the strike water, and is added at a strike temperature to achieve the first rest’s temperature.

Mashing-out is increasing the temperature in the mash tun (through heat or infusing hot water) to 170°F (77°C) which stops the conversion process and makes the wort more viscous.

Sparging is the act of draining water through the grain bed to try to extract additional sugars.

The wort originally collected is called the first runnings.

Wort collected after sparging (if batch sparging) is called the second runnings.

The Vourlof phase is the very first wort that comes out of the mash tun. It is cloudy, and the first few pints are collected and poured back into the mash tun.