We now support BeerXML import and export! An inventory deduction option is now available when you go to Brew a recipe. We also addressed several items in the Feature Request Forum from fellow brewers.

BeerXML is an interchange format for moving recipes between brewing software packages. We support the version 1.0 spec. The 2.0 spec appears to be in limbo.

Look for the Import BeerXML link under the ‘New Beer Recipe’ navigation menu at the top.

It gives you the option of bringing in unrecognized fermentables as inventory custom fermentables. You may upload a file with multiple recipes in it. Trial users – recipes imported from BeerXML count towards your 5 recipe trial limit.

On the view recipe page, there is an option under the export tab. 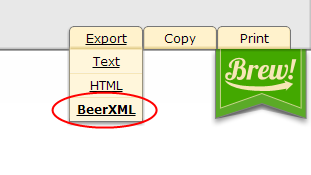 Expect to see minor differences in recipe stats when moving between programs. This is caused by different brewing equations, rounding, etc. Make sure to double check every field, especially batch size, efficiency, and grain ppgs. For example, Brew Target wants to set its own batch size based on equipment, which can really throw off a recipe’s stats.

If you are getting confused by the results of an import or export, we are happy to look into differences with you. Please use the Contact Us page.

When you go to create a brew session, if the system detects any matches between your inventory and the recipe, a new table will appear. 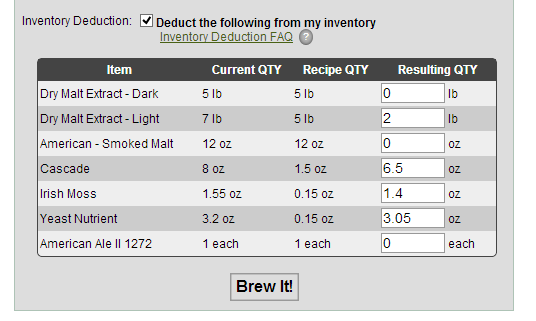 The screen gives you the opportunity to override the final inventory balances that will result. It covers grains, hops, yeast, and other ingredients. The only thing it doesn’t cover is priming sugar (unless you add it as an other ingredient).

The logic is extensive in terms of converting between all the possible unit types. For example, a grain in your inventory could be in pounds, but the recipe calls for ounces – the inventory deduction logic will handle that. It can even do corner cases like converting from teaspoons to liters.