Molé sauce is a savory, and Spicy topping for Mexican/South American dishes. It uses chocolate, cinnamon, and smoked peppers as a base to bring a bitter, smoky, and spicy flavor to any dish. It also a perfect spice regiment for the body pumpkin can bring to a beer, and is perfect for a stout because of its use of chocolate.

So that was the inspiration. One of my good friends is Honduran, and his nickname for him from me is the Honduran thunder, which seems all but fitting for the name of the brew, and so it has been dubbed.

Brew day: brew day was a nice 45 degrees and misty in buffalo, ny. A rarity for the beginning of January. 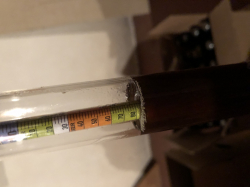