This recipe is based on Vytautas Jančys's Keptinis recipe from Historical Brewing Techniques by Lars Marius Garshol.

Otherwise, very normal brew until the end of the mash at which point I covered a baking sheet in spent grain (this was only a small portion of the overall grain), and baked it. Since the wort wasn't draining well from the mash tun, I spent a long time trying to stir the wort out of the mash, and scooping it out and pressing it through strainers. I think it was about an hour before I could get about 6G from the mash tun and began the boil. I boiled it for about 20 minutes before adding my bittering hops, then 15 minutes and added my immersion cooler, then another 15 minutes and then added my flavour hops before starting to cool the wort.

I only cooled the wort down to about 60 or 70C, at which point I put it back into the mash tun (with most of the grain removed), then I dumped in the baked grain to soak for 30 minutes to an hour before draining again (this time much easier since there was very little grain) into a bucket where I pitched my kveik and went to bed.

About 5 hours later I got up and saw that the kveik wasn't doing anything, so I pitched another pack of kveik I had and waited 4 more hours, before finally giving up and pitching a pack of dry US-05 which grew a krausen within minutes.

To be fair, the packs of kveik I had were pretty old. If this brew turns out even moderately well, I'll want to try it again with kveik.

After the gravity dropped by about 30 points (about 12 hours after I pitched the US-05, 21 hours total from transferring to the open bucket), I transferred to a glass carboy.

Within about 16 more hours (37 hours total), it had gone from 1.073 to 1.016. It stayed at about 30C pretty much the entire time, which is well above US-05's temperature max recommended temp of 25. It's been about a week since I made this, and I'm planning to wait another week before bottling.

Note that about a week after brewing, it looked like it was stable at 1.015, but then I accidentally jostled the carboy a bit and the SG dropped to 1.011. My best guess is that the floating hydrometer was pressed up against the side of the carboy, so it wasn't giving a valid reading until I jostled it.

Another note: from watching https://www.youtube.com/watch?v=K4CdMlUpZUI I gather that it's pronounced KEPTEENEE. 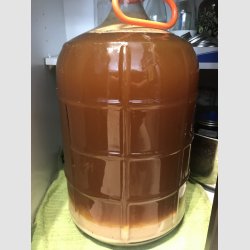 * The height/width of the iframe can be set as a percentage of the container (width="95%"), or in pixels (width="500px"). Looks good at any width above 320px.
Close
Print
Recipe costs can be adjusted by changing the batch size. They won't be saved but will give you an idea of costs if your final yield was different.
Gallons
Ok
Discussion about this recipe:
Back To Top
Want no ads? Go Premium and unlock all our brewing tools!