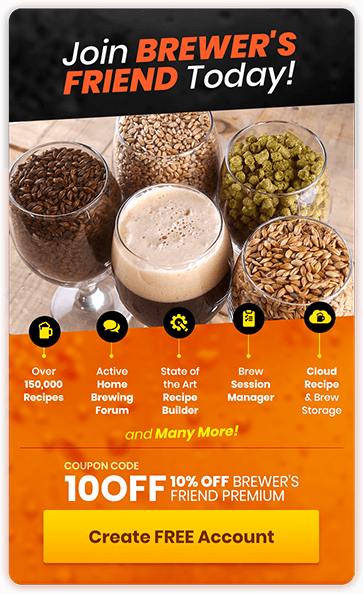 This is Tom Watson's (NewToHomebrew Tom) version of Mikkellas Breakfast Stout. I modified it a bit for a 2.5 gallon batch. Tom used Danstar Nottingham where I have a pack of British V I need to use. I also don't have Bohemian Pilsner - I have regular American Pilsner. I hope there is not a lot of difference.

If this is wrong anywhere, it will show up in hop utilization. I have to brew once and adjust. This is not linear, so it is an educated guess.

The predicted IBUs for Toms was ~90, I dropped my profile to near that. It was 11 points too high.

Tom's Final Gravity was 1.036 - 9%! I speculate that he topped out the alcohol tolerance on Notty...but it's still a great eater.

He cold crashed his after fermentation and then raised it to 68 for a couple of days for a Diacetyl rest. Then he prepared the coffee infusion the day before kegging.

Coffee prep (for 5 gallons!):
Boil 1 Liter of water, collect 500 ml in a sterile jar. Chill in fridge 2 hours. Add 70 gm of coffee...he used Taylor's of Harrigut Italian Roast and then french pressed it to remove the grounds - it also looked to be rather finely ground. He put the whole carafe in the fridge overnight. He added it to the beer, being careful to NOT splash and oxygenate his beer after spraying it with sanitizer. He added it by pouring it down the side wall of his fermenter.

My Coffee Prep (for 2.5 gallons):
I boiled enough water to collect 300-350 ml in the carafe. I sanitized the carafe before adding the water. The water temp was 125 degrees when I added the coffee. For my coffee, I used 2 K cups of Aspen Ridge Donut Shop coffee (a nice nutty flavored coffee - I tried several others but ultimately, I liked this coffee best). I opened the K cups and dropped the coffee in the carafe and put it in the fridge overnight. Next day, I sanitized a funnel with a piece of hose so I could trickle the coffee down the side of my fermenter, avoiding oxygenation. I then set the temp to 38 and closed it up after securing the top.

Tom doesn't publish this but from watching most of his brewing, it seems that he prefers "Burton on Trent" same as his buddy - Harrybrew69.

Kegged the next day. I will have to minikeg half of the batch and bottle the rest.

When tasting, this was astringent after 2 weeks. I was disappointed. However, after 4 months of conditioning, I can report that this beer is as good as Sam Smith Organic Chocolate Stout...so I am happy. I will be doing this one again as a 5 gallon batch.