Erich Zann’s Glance At The Window 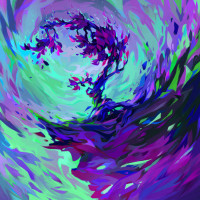 “Those haunting notes I had remembered, and had often hummed and whistled inaccurately to myself; so when the player at length laid down his bow I asked him if he would render some of them. As I began my request the wrinkled satyr-like face lost the bored placidity it had possessed during the playing, and seemed to shew the same curious mixture of anger and fright which I had noticed when first I accosted the old man. For a moment I was inclined to use persuasion, regarding rather lightly the whims of senility; and even tried to awaken my host’s weirder mood by whistling a few of the strains to which I had listened the night before. But I did not pursue this course for more than a moment; for when the dumb musician recognised the whistled air his face grew suddenly distorted with an expression wholly beyond analysis, and his long, cold, bony right hand reached out to stop my mouth and silence the crude imitation. As he did this he further demonstrated his eccentricity by casting a startled glance toward the lone curtained window, as if fearful of some intruder” — The Music of Erich Zann by H.P. Lovecraft