Book Review – For the Love of Hops

Great book about hops. I learned something every page. Made my mouth water at times… Covers the entire range of hop related topics, from hops breeding, to farming, to drying and packaging, to brewing techniques, and even the complex sensory perception that is the enjoyment of a hoppy beer.

For The Love of Hops: The Practical Guide to Aroma, Bitterness and the Culture of Hop
by Stan Hieronymus 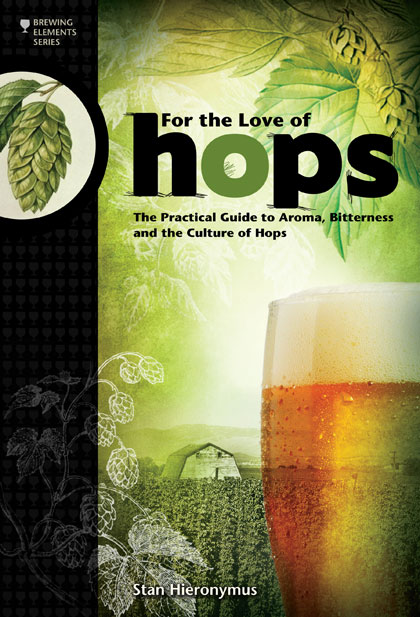 An appreciation of what Pro Brewers go through:
The book talks a lot about the relationship between farmers and brewers. It makes sense that the hop industry is focused on commercial brewing, since they are the largest consumer of hops. As a home brewer, buying at most a couple pounds of hops per year, it was neat to get some insight into what pro brewers face. Selecting hops for a brewery, planning ahead for an entire year, and working to keep the beer consistent year to year is quite a challenge.

New World Hops, a key part of the birth of Beervana:
The book covers the history of hops, going all the way back to the beginning when hops grew wild and were harvested at random.

Had it not been for Cascade hops Oregon would not be called Beervana. In fact, Beervana wouldn’t even exist *shudder*. Back in 1956 Cacade was discovered at the Oregon State University hops breeding program. Cascade was released to the public in 1971. Slowly brave and bold brewers, including Sierra Nevada Brewing Company started using it, and this kicked off the craft beer revolution! There were many other new hops breeds in the pipeline at the time, but nobody expected how far the revolution would go.

Hops breeding on the rise:
The book talks in detail about hop breeding programs around the world. I had no idea how aggressive hops breeding programs are – over 100k starts are created every year to be whittled down to a select few candidates that might make it into the kettle someday. As brewers and beer drinkers, we owe these breeding programs a lot. Up until the new world varieties came along there wasn’t much that could be done to make a beer distinctive. The choices back in the day were Fuggle, Goldings, Cluster, and maybe a couple others.  In today’s world we are sort of spoiled by the wide array of hops we can choose from. Take Citra, which imparts fruity tropic notes, or its polar opposite Magnum the clean bittering hop perfect for amping up bitterness without imparting flavor.

Hops in the Brewery:
The other thing this book brings up is just how different brewing practices are when it comes to the use of hops. Ask 10 brewers about dry hopping and get 11 answers. Macro breweries use more and more hop extract, while micro brewers do everything from whirlpools to hops stands to dry hopping to double dry hopping to hop torpedoes. The use of hops in beer is truly an art form!

I was amazed to learn that our genes play a role in how we experience beer. It turns out, 1/3rd of people cannot detect the odor from an essential oil in Saaz giving it its hallmark smell and flavor. Instead of color blindness, this is a form of hop oil blindness, and is not fully understood by science.

A Good Reference:
The book has a complete listing of all the main hop varieties.

If you are looking brew some super hoppy beers, there is a chapter with a couple dozen home brew recipes from award winning breweries. The recipes are detailed in terms of quantities, times and amounts.

Definitely got a renewed appreciation and curiosity for hops!