Want to know everything about IPAs? Check out this book by Mitch Steele

IPA Brewing Techniques, Recipes, and the Evolution of the India Pale Ale by Mitch Steele.

A great book covering every detail you ever wanted to know about IPA brewing. It starts from the early history of beer all the way through to today’s modern hop bombs like Pliney the Elder. The author is the Brewmaster at Stone Brewing, so when it comes to bitter beer, he knows what he is talking about.

The recipe reference in the book is worth it alone, about 60 pages in total covering historic and modern IPAs. Don’t expect to get the times and amounts of ingredients in recipes though (bummer). The key appears to be aggressive dry hopping in most cases! 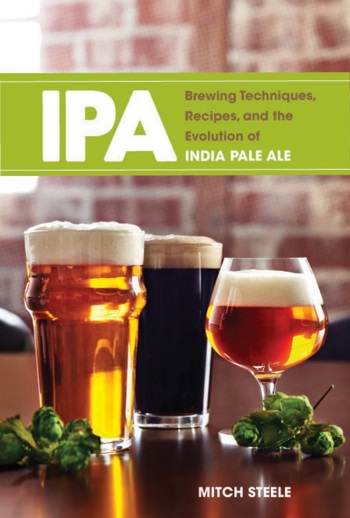 There is a lot to learn from this book. It challenges the historical myth that IPAs (India Pale Ales) were brewed specifically for export to India because nothing else could survive the journey. The author points to evidence that Porters, Pale Ales, and all kinds of brews were shipped to India for almost a century before the name IPA came along. What we do know is the beer back then had stability problems, and hoppier, stronger beers were more suitable to such a long haul. These high quality, strong, bitter beers were originally sold as Pale Ales or October ales. In the early to mid 1800’s Pale Ales were re-branded to read “Pale Ale for India”, or “Pale Ale brewed Expressly for the India market” – seems like more of a marketing switch than a recipe formulation issue to me. In the end the name stuck, but the style evolved considerably.

A typical “IPA” or Pale Ale from the late 1700’s was radically different from what we think of as a modern IPA.

Two world wars, prohibition, and the rising popularity of the continental lager all but destroyed IPA brewing for most of the 1900’s. However, this all changed in the 1990’s with a craft beer renaissance. This was enabled by new hop varieties like Cascade that were becoming widely available. I am proud to say that my hometown, Eugene, OR is credited in the book as being the first craft brewery to put an IPA on tap continuously – Steelhead Brewing Co, with its Bombay Bomber! Thank you Teri Fahrendorf!

The book also helped me realize just how spoiled we modern brewers are given the wonderful selection of hops available to us. Consider, what would the world be like without the four C’s (Cascade, Columbus, Chinook and Centennial)? Let’s not forget the patented strains Simcoe and Amarillo which run up in about 10 years. There are new hop strains being developed all the time, so the future looks great for the variety and quality of new IPAs and beer styles. Going forward, brewers will continue to push the limits and evolve the IPA style. New categories may someday be introduced to cover the twists like Black Ales, Black IPAs, and Cascadian Dark Ales (CDAs). We discussed that issue previously in this article: Black Ale as a Beer Category.

Here’s to filling all your kegs with IPA’s and IIPA’s – cheers!