I love my Keezer

Home brewers who keg their beer have a keezer or kegerator to keep it cold.

I prefer the Keezers, not to be confused with Geezers… 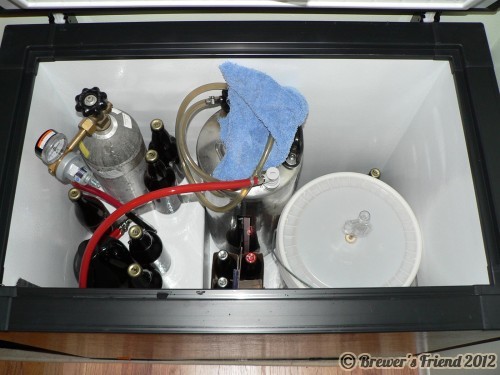 A kegerator or keezer can also double as a way to lager. I have used a standard fridge (kegerator) in the past. In the image above, the bucket on the right is a German lager bubbling away. In my opinion, the chest freezer setup (keezer) is much much better than a top/bottom fridge (kegerator). The keezer was cheaper to get setup, it holds more, and it is quieter. I think it also draws less power than a fridge.

Most setups will require a temperature controller. Freezers are designed to go below 32F, so to avoid freezing the beer, the temperature controller cuts power to the compressor when the desired temperature is hit. I keep mine around 40F, but raise it to 50F when doing my primary fermentation for lagers. You can just barely see in the bottom left corner where the senor probe is duct taped to the inside of the freezer.

Home Brew Talk has an awesome thread about the options here:
https://www.homebrewtalk.com/f35/sizing-your-chest-freezer-corny-kegs-75449/

You can choose between getting one that holds anywhere from 2-10 corny kegs!

The only down side I have found is it is a little harder to lift full buckets, carboys, and corny kegs into the unit.

The inside of chest freezers have a ‘hump’ where the motor is. Corny kegs are too tall to sit on top the hump because the lid would not close. The way around this is to build a collar extension that raises the height of the lid. Most people put their taps through the collar.

In the image above there is a rag to catch drips from the picnic tap. I have read that keezers can get gross inside if not taken care of. Once I spilled a bit of beer on some bottles and did not take care of it. A few weeks later mold started growing. It wasn’t too bad, but I’m glad I caught it early. To avoid any future mess I make sure any beer that goes astray is wiped up immediately. Sometimes the walls of the keezer have moisture on them so I wipe them off occasionally.